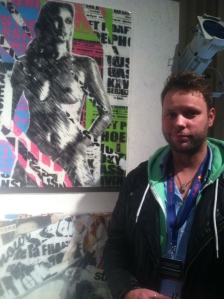 Yannick Hamon is a Portland transplant from southern France. He moved here a couple years ago with his wife, and just about two years ago he began to work on his art full time, which he’s been successful at so far.

His work was on display at a Red Bull curates show in Portland a couple weeks ago, and his work stood out the most – I can’t say exactly why, other than that they seemed to be the least Portland-esque paintings there.

I don’t claim to be an art expert, so when I look at Yannick Hamon’s art I feel a strange mix of tragedy and excitement. So when I ask him if he thinks they’re tragic, he says not at all. His paintings are expressions of all the things he loves. When looking at them in that light, I can see why I find them exciting, because he apparently loves a lot of the same things I do. 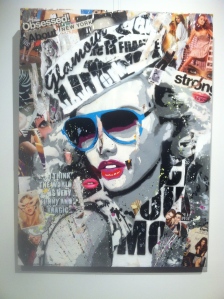 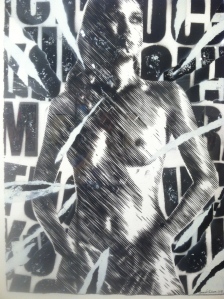 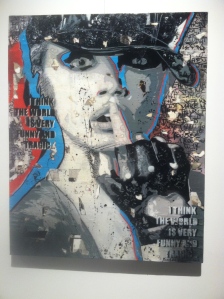 I tend to see something of an ordered chaos in his paintings. There’s always a central focus, but the focus is surrounded by a kind of myriad of chaos that make up for a larger picture. I was able to stand at a distance and look at one thing, but closing in on the paining one is able to find so many smaller things. At some point I had to ask him what is the Lycée Montmartre. It turns out it’s an arena where Daft Punk played with Phoenix. Rock and roll mixed with fashion, two themes to be found in his work. 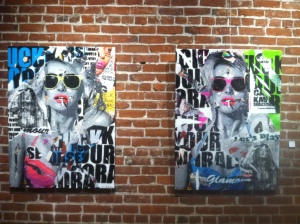 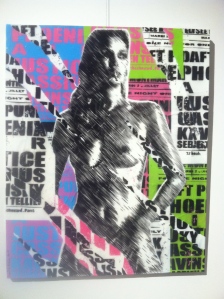 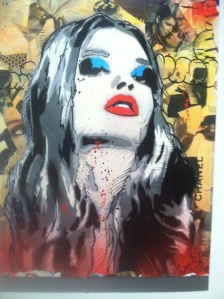 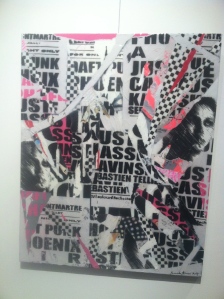 “Hey Yannick, was it intentional that the word ‘ass’ is right smack in the middle?”

“Not necessarily, but i’m glad it is.”

There is a certain provocativeness he brings to his work. His subjects don’t care much to play by the rules. “You’ll see that I say, ‘fuck your morals,’ and that’s what they are saying in my paintings.”

He provides a unique flavor to Portland, bringing in elements from his home and elsewhere, and giving it a Northwest spin. All his work is for sale on his page, http://yannickhamonart.tumblr.com.

And by all means, send him an email and offer to buy him a beer, i’m sure he’d be more than happy to oblige.

to Blog a Blog.

While sitting on the subway, eager to to arrive to the event, I became slightly concerned that I was too late. The event started about an hour or so prior, and I made the decision to show up fashionably late, but I was still worried that I would be turned away because the event was […]

Gaming Documentary: Mighty No. 9 Released Alongside the Game

Might No. 9 is a new game by developers Comcept and Inti Creates, and is getting released this week after years of delays and missed deadlines. The game is billed as a spiritual successor to the Mega Man games, where the developers tried hard to recreate the challenge and excitement. It began production after a successful […]

The 2nd Part of my Hyper Light Drifter Review, Sort-Of

I managed to complete playing Hyper Light Drifter. This second play through took only half the time to complete than my first playthrough, which funnily enough, I wasn’t able to play all the way through. I got pretty far in the game, but my own impatience caused me to pass over many required items and […]

Earlier I posted about Blink 182’s new song and Mark Hoppus’ other, anti-Blink 182 band, +44. Well, with the +44 song, there was also an electronic remix of that song, which was pretty good. Check it: